SELF DEFENCE – GYAKU WAZA with ED MARTIN a.k.a. PAPA-SAN (selfdefence#07). Organised by Bujinkan Eskilstuna and filmed with permission on February 2006. 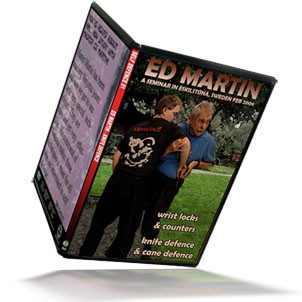 In this video Ed demonstrates and explain “Gyaku-gi kaeshi-waza”, how to counter the nine basic joint locks and takedowns in the Bujinkan system. Then how to do the same techniques more effortlessly and effective.

If you know how to do a technique correctly, the counter technique will be much more difficult.

The theme of this seminar was the Gyaku-gi techniques.

Being an older man Ed always walked with his special cane made by the Amish people. It was made of hickory tree and very strong. He had a whole repertoire with cane techniques. He was always armed with a cane and a big smile. In this video he shows a few of his cane techniques at the end of the evening.

Ed Martin Shihan aka Papa-san is a long time student and master teacher of the Bujinkan Dojo system founded by Dr Masaaki Hatsumi Soke Ph.D. Ed received the Bujinkan Golden Dragon medal, the Bujinkan’s highest award, in recognition of his self defense videos.

Who is Ed Martin?

Ed Martin Shihan nick named as “Papa-San” by Sōke is a long time student and master teacher of the Bujinkan Dojo system founded by Dr Masaaki Hatsumi Soke Ph.D. He earned an award of merit from Masaaki Hatsumi for his Self Defense for Everyone video.