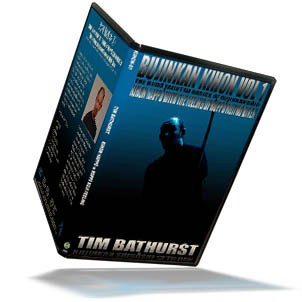 In August 2004 Tim Bathurst came to visit us in Stockholm, Sweden to give a seminar on this years Bujinkan theme, Roppô Kuji no Biken. This video is from the extra training on Thursday, and the first hours from Sunday morning at the seminar (see Keiko#9).

He taught Kihon Happô basics and applications with or without weapons, mostly knife and swords.

Good question! Tim is a senior student of Grandmaster Masaaki Hatsumi, living and training in Tokyo Japan. After a few visits starting in 1990, Tim moved to Japan in 1997 and is one of the few foreigners to have earned the title of Shihan while living in Japan. Presently graded at Judan-ka (10th Dan-Fire level13th Dan to some.)