NINPO TAIJUTSU – NINJUTSU HEIHO with DEAN ROSTOHAR (Shinken Kata #07). The seminar was organised in Stockholm, Sweden on 26th and 27th of September 2009 by Kaigozan Dojo. 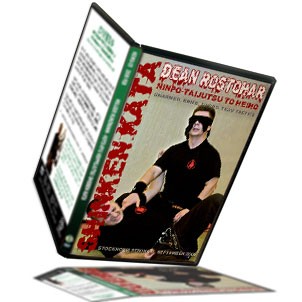 Dean taught unarmed defence, knife, sword and stickfighting. With him was also three members from his Dojo. They also helped demonstrating many tactical techniques how to work as a group.

On this video you will see unarmed defence, knife, sword and stick-fighting demonstrated.

Dean and his three students also showed many tactical techniques how to work as a group.

This is a very good video if you are interested in realistic self-defence and fighting from the Bujinkan Ninjutsu system.

We also recommend this video to anyone working or interested in security work as a security, police and military. Although some of the techniques is not allowed to use in police force/work you can still see how it could be used against you if the opponent is skilled.

This video was filmed during his seminar in Stockholm, Sweden sponsored by Bujinkan Kaigozan Dojo. September 26-27’th 2009. With Dean Shihans experience from real fighting in war, and also from his time in the police force in Croatia he certainly know what he is doing. For his full resume, check out his web site…

Dean Shihan has a lot of experience from real fighting in the independence war of Croatia, and also from his time in the police force. He was born 1965 and started training Martial Arts at the age of 10. He have experience from many martial arts styles but he was not completely satisfied with them until he found the warrior art – Bujinkan Ninjutsu/Ninpo Taijutsu. For his full resume, check out his websites. http://www.bujinkan.hr http://www.specwog.bujinkan.hr. If you want to sponsor a seminar or course, please don’t hesitate to contact him.