MASAAKI HATSUMI SWEDEN TAIKAI 1991 in Malmö was the fourth time Hatsumi Soke visited the land of the Vikings. 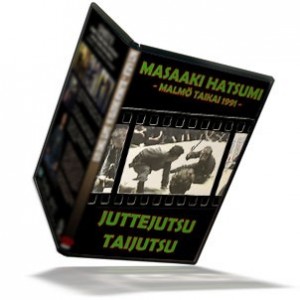 Accompanying him was
– Noguchi Shihan and
– Navon Shihan.

The theme was Taijutsu and weapons.

The main theme this three day Taikai was Juttejutsu and Taijutsu.

Hatsumi Soke said that he never thought we would become so good quickly. Therefore he said he needed to start teaching us more correctly. So he taught very basic Taijutsu techniques such as break falling, rolling, stretching, throwing, counter throws, kicking, striking and much much more.

He also taught how to use the Jutte for defence against unarmed attacks and various weapons such as sword, staffs for example.

Soke opened the Taikai and said that now that we have progressed so far he will start teaching us for real. So he started with the very basics of Taijutsu such as break falling and rolling, later going over some stretching exercises. There is not many videos out there where he teach basics like this. He did of course also teach us more advanced stuff as usual, good understand play manner.

Hatsumi Soke taught how to use the Jutte for defence against unarmed attacks and various weapons such as sword, staffs for example. Jutte is the baton that the police officials used against the (maybe drunk) Samurai. Killing a Bushi was a bad choice, therefore the policie officials developed weapons that didn’t kill people but could be used against swords effectively.

He also taught Muto-dori, unarmed defence against sword, Naginata (halberd) and many other weapons.